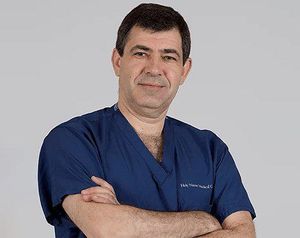 Board-certified general surgeon, Mikhail A Botvinov, DO, MD, specializes in bariatric and general laparoscopic surgery. At Bergen Bariatric and Surgical Solutions P.C. in Westwood, New Jersey, he uses laparoscopic and minimally invasive surgery to treat and address issues associated with obesity and other general surgery conditions.
With a dual medical education, Dr. Botvinov is both a medical doctor (MD) as well as a doctor of osteopathic medicine (DO). He is experienced in advanced laparoscopic surgery, general surgery, and hernia surgery, and provides treatments for gallbladder issues. For patients who want to lose weight, he offers bariatric surgery, gastric sleeve procedures, and gastric band removal.
Dr. Botvinov completed his medical training at I.M. Sechenov First Moscow Institute of Medicine in Moscow, Russia, the oldest and one of the most prestigious medical universities in the country. He worked as a general surgeon at the Institute of Laser Surgery in Russia and earned a national patent for his work in converting a gastrointestinal device to a carbon dioxide laser.
Dr. Botvinov then relocated to the United States, where he completed his medical degree at The New York Institute of Technology College of Osteopathic Medicine in Old Westbury, New York. He completed surgical training at Flushing Hospital and minimally invasive laparoscopic and bariatric training at Staten Island University Hospital, both in New York City. He is licensed to practice in New York and New Jersey.
Dr. Botvinov is a member of the American College of Osteopathic Surgeons, the American Osteopathic Association, the American College of Physicians, the American Medical Student Association, the American College of Surgeons, and the American Academy of Cosmetic Surgery. He is a candidate member of the Society of American Gastrointestinal and Endoscopic Surgeons.